chef/author extraordinaire, joyce goldstein, has done it again! I can't wait to get my hands on her latest book to add to my collection! i have long admired her food sensibility and style. she is perhaps, the best cook that i know and an authority when it comes to cooking of the mediterranean.


Joyce Goldstein announces that on May 27, 2008 Mediterranean Fresh will be published by W.W. Norton Publishers, New York. It has been chosen as a main selection by The Good Cook.

“To the average American diner, the word salad conjures up an image of a bowl of leafy greens tossed with a dressing, served as a precursor to a meal.” But for renowned cookbook author and chef Joyce Goldstein, the salad—served before or after the main course, or as a meal in and of itself—is a jumping-off point for exploring the tastes of the Mediterranean, from a Middle Eastern carrot salad tossed with citrus dressing to an Italian salad enhanced with delicious cheeses and nuts and a peppery vinaigrette. Cultivating a love of and appreciation for salads, as well as the ingredients of the countries that border the Mediterranean Sea, is Joyce Goldstein’s mission, and in MEDITERRANEAN FRESH: A Compendium of One-Plate Salad Meals and Mix-and-Match Dressings (W. W. Norton & Company; May 27, 2008; $30.00 cloth), she proves beyond a doubt that a salad can be a complex, sensuous, and satisfying dish.
Goldstein demonstrates the versatility of the Mediterranean region and of the concept of salad itself with over 140 recipes for easy-to-make, delicious, and healthful salads and small plates along with 30 dressings. By simply changing the dressing—pairing a beet dish with Walnut Vinaigrette from France or a Turkish Yogurt Dressing—or the garnish—adding chorizo and Sherry Vinaigrette to make a lentil salad Spanish, or using feta instead of goat cheese for French flavor—nearly any dish can be transformed to suit every palate and mood. Goldstein includes variations for many of the salads and dressings to ensure that these dishes will appeal to anyone from vegetarians to pork devotees, health food junkies to carbohydrate lovers.
“It’s Easy Being Green: Leafy Salads” celebrates the traditional green salad, both basic (Green Salad with Croutons and Gruyère Cheese) and unusual (Collard Green Salad with Yogurt Dressing), while “Raw and Cooked Vegetable Salads” branches out to the rest of the vegetable kingdom, with vegetable–based salads like the Spanish escalibada, a mixture of grilled eggplant, peppers and tomatoes, and artichokes cooked with oranges, three ways, Sicilian, Moroccan and Turkish. Carbohydrates take center stage in “Classic and Modern Grain, Bread, and Pasta Salads,” from Panzanella (the traditional Italian bread salad) to a North African–inspired Couscous Salad with Almonds, Raisins, and Saffron Onions. And in Bean Salads, chickpeas, lentils, white beans and more are used to make complex, savory dishes like the Turkish white bean salad Piyaz as well as purees like Hummus ba Tahini. But that’s not all: Goldstein also teaches you how to turn dressings into delicious marinades and sauces for meat (Leg of Lamb with Tapenade), poultry (Grilled Chicken in Hot Pepper Citrus Marinade), and seafood (Shrimp and Artichokes with Romesco Vinaigrette) in “From the Sea” and “Poultry and Meat Salads and Small Plates.”
Yet MEDITERRANEAN FRESH is more than just a collection of recipes. Its features also include:
· A foreword by chef Dan Barber of Blue Hill at Stone Barns
· An essay that makes pairing wines with salad as simple as can be by master sommelier Evan Goldstein
· A beautiful, fun, four-color design that makes the recipes as simple to read as they are to prepare
· Thirty-four elegant color photographs of the salads and dressings by Andre Baranowski
· Sidebars on techniques like preserving lemons, cooking dried beans properly, and choosing your lettuce
· Lessons in dressing a salad (how much is too much?), the keys to developing your palate (a lot of it comes down to tasting!), and the tricks to balancing acidity (do you have a “tart mouth”?)

In this primer on preparing any type of salad and dressing, which doubles as a guide to the flavors of a number of wonderfully varied, exotic cuisines, Joyce Goldstein demonstrates that there are only two types of cooks in the kitchen: those who love the art of salad-making, and those who haven’t yet picked up a copy of MEDITERRANEAN FRESH.

Here is what Publishers Weekly says:
Mediterranean Fresh: A Compendium of One-Plate Salad Meals and Mix-and-Match Dressings Joyce Goldstein. Norton, $30 (320p) ISBN 978-0-393-06500-8
Chef Goldstein, author of several Mediterranean cookbooks, focuses here on “146 delicious salads and small plates... to show the versatility of Mediterranean dressings as marinades and finishing sauces.” And with these, she hopes to change the way the average American diner thinks of salad—as a bowl of leafy greens tossed with a dressing, served as a precursor to a meal. In fact, leafy greens make up only one of seven categories included in Goldstein's collection (others include fruit, bean, and grain salads as well as protein-based seafood, meat and poultry salads). Although many ingredients are repeated, Goldstein manages to make each recipe fresh and enticing. Readers may be familiar with some of the traditional classics such as Panzanella (bread salad) and Salad Niçoise. However, the real magic of the book lies with the lesser-known dishes like Italian Parsley Salad with Pecorino, Catalan Salt Cod and Pepper Salad, and Vitello Tonnato (veal with creamy tuna sauce). Well researched, and highly informative, each section begins with a list of ingredients and their definitions, while each recipe includes history on the dish as well as some of Goldstein's related personal experiences. This book is a delight, an inspiring collection. (May)


Joyce will be signing books at: 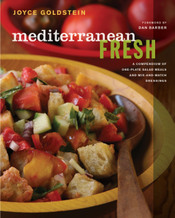 great kenn! I agree, a must.

this book is a must have for me, with the local produce coming in, it is definately salad season. 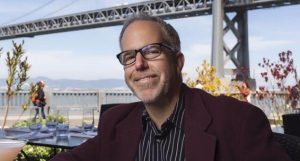